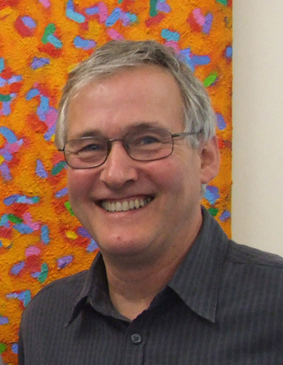 David H Jones studied Fine Art Painting at the West of England College of Art, Bristol. His Tutors included Paul Feiler, David Inshaw, Alfred Stockham, Hassel Smith and visiting tutor Terry Frost. David’s roots are in Merseyside, where he studied Art Foundation at Wallasey School of Art. He lives and works in Lambourn with a studio overlooking the Lambourn Downs.

David grew up on the Wirral and spent his childhood exploring the countryside, fascinated by nature and closely observing pond life and birds. Although as a child he also loved painting, his first ambition was to be an ornithologist. but in his early teens he visited the Walker Art Gallery in Liverpool and was inspired with a new possibility and ambition.

After art school David moved to rural Berkshire where he established a paintwork restoration business with his wife and raised three children. In 1986 he began teaching adult studies courses : art and later life drawing. This brought him back to his own painting interests but with an emphasis on the observation of landscape and figure. The escarpment of the Lambourn Downs towards Wantage inspired several paintings and throughout the 1990’s’ he frequently visited local Beech woods and coppices to make watercolour studies, recording the seasonal changes. In 2000 he ceased teaching and set up a large studio space at a nearby farm, which gave him the space to make larger work and return to his earlier interest in abstraction.

Influences have come from many sources and his work is also informed by travels in Europe India and North Africa. For twenty years he has almost annually visited the Greek Ionian Islands of Corfu and Paxos. On Paxos he would spend time in the olive groves, particularly on Mamari Beach painting watercolours of the shifting light that illuminates the olive grove, often returning each time to favourite locations

The woodland and olive grove studies had a significant input into his later work. “When I sit challenged to capture the essence of what I see in all its chaotic complexity I can only do it by simplifying it into patterns of colour and tone. When I work in the studio on abstract painting In a way I am concerned with the same process of pattern making.”
Next
Previous